From the Reporters’ Own Mouths: The Twin Towers’ Explosive Demolition

The widely held belief that the Twin Towers collapsed as a result of the airplane impacts and the resulting fires is, unbeknownst to most people, a revisionist theory. Among individuals who witnessed the event firsthand, the more prevalent hypothesis was that the Twin Towers had been brought down by massive explosions.

This observation was first made 14 years ago in the article, “118 Witnesses: The Firefighters’ Testimony to Explosions in the Twin Towers.” A review of interviews conducted with 503 members of the New York Fire Department (FDNY) in the weeks and months after 9/11 revealed that 118 of them described witnessing what they interpreted that day to be explosions. Only 10 FDNY members were found describing the destruction in ways supportive of the fire-induced collapse hypothesis.

The interviews of fire marshal John Coyle and firefighter Christopher Fenyo explicitly support this finding. Coyle remarked in his interview, “I thought it was exploding, actually. That’s what I thought for hours afterwards. . . . Everybody I think at that point still thought these things were blown up.” Similarly, Fenyo recalled in his interview, “At that point, a debate began to rage [about whether to continue rescue operations in the other, still-standing tower] because the perception was that the building looked like it had been taken out with charges.”

News reporters constitute another group of individuals who witnessed the event firsthand and whose accounts were publicly documented. While many people have seen a smattering of news clips on the internet in which reporters describe explosions, there has never been, as far as we know, a systematic attempt to collect these news clips and analyze them.

We decided to take on this task for two reasons. First, we wanted to know just how prevalent the explosion hypothesis was among reporters. Second, anticipating that this would be the more prevalent hypothesis, we wanted to determine exactly how it was supplanted by the hypothesis of fire-induced collapse.

In this article, we present our findings related to the first question. In a subsequent article, we will examine how the hypothesis of fire-induced collapse so quickly supplanted the originally dominant explosion hypothesis.

To determine how prevalent the explosion hypothesis was among reporters, we set out to review as much continuous news coverage as we could find from the major television networks, cable news channels, and local network affiliates covering the events in New York.

Unfortunately, we were not able to find coverage spanning most of the day for every channel. Thus, while the collection of news coverage we compiled is extensive, it is not comprehensive. To fill in the gaps where possible, we included excerpts of coverage that aired later in the day if we found that coverage to be relevant. We also included one excerpt from USA Today’s coverage that we found to be relevant and three excerpts from an afternoon press conference with Mayor Rudolph Giuliani and Governor George Pataki that aired on almost every channel. In general, the times at which these excerpts aired are unknown, though in some cases we were able to identify an approximate time.

The news coverage we compiled and reviewed totaled approximately 70 hours. 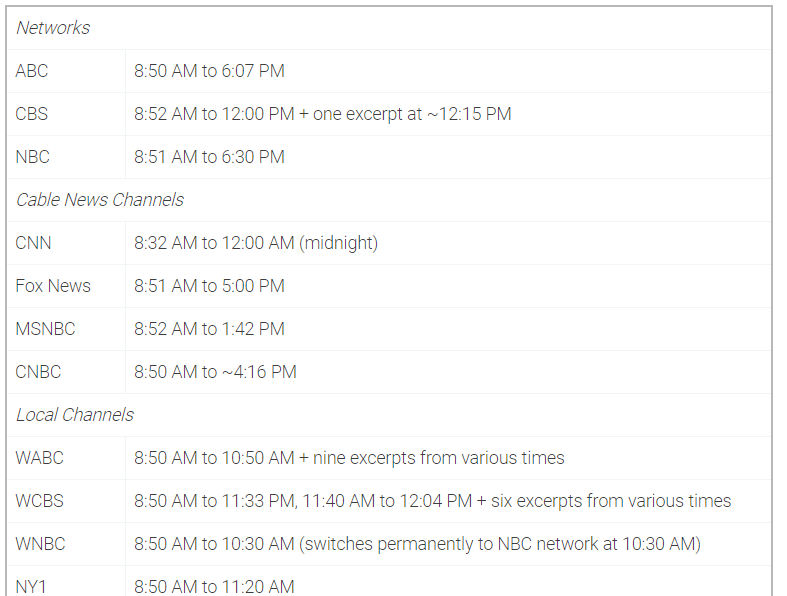 Note: We invite anyone who has portions of the television coverage we were not able to find to send them to us at info@AE911Truth.org. We will incorporate anything we receive and update this article accordingly. For anyone who wishes to replicate our work, the entire collection of footage can be downloaded here.

We sought to answer one main question in our review of the news coverage: How many reporters described the occurrence of explosions — both the raw number of reporters and as a percentage of all reporters who covered the Twin Towers’ destruction — and what was the nature of their reporting? To answer this question, we needed to establish clear criteria for identifying what we will call “explosion reporters” and “non-explosion reporters.”

Because the airplane impacts were often referred to as explosions, we were careful to exclude any instances where it was not absolutely clear that the reporter was referring only to the destruction of the Twin Towers.

As we studied the news coverage and began to recognize patterns in how the Twin Towers’ destruction was reported, we developed three separate categories of reporting that would classify someone as an “explosion reporter”: (1) eyewitness reporting, (2) narrative reporting, and (3) source-based reporting. Below we provide definitions of each.

“Eyewitness reporting” is when a reporter is an eyewitness with a direct view of or in close proximity to the destruction of one or both of the Twin Towers and perceives an explosion or explosions in conjunction with the destruction — or perceives one or both of the towers as exploding, blowing up, blowing, or erupting. Although we usually excluded the word “boom,” which could apply either to an explosion or to a collapse, we included it in one case because the totality of what the reporter (Nina Pineda) described indicated that she viewed the event as being explosion-based.

We did not include reporters who described only a “shaking” or “trembling” of the ground. The perception of the ground shaking was widespread and constitutes important eyewitness evidence, but it does not necessarily reveal much about how the reporter interpreted what she or he was witnessing. Among reporters who mentioned demolition, we excluded the ones who merely compared the destruction to a demolition whenever it was clear that the reporter believed it to be a collapse caused by structural failure. We also excluded reporters who used the word “implode” or “implosion” whenever it was clear that the reporter used it to describe the building collapsing in on itself, as opposed to a demolition.

Here is an example of eyewitness reporting:

David Lee Miller, Fox News, 10:01 AM: “Suddenly, while talking to an officer who was questioning me about my press credentials, we heard a very loud blast, an explosion. We looked up, and the building literally began to collapse before us. . . . Not clear now is why this explosion took place. Was it because of the planes that, uh, two planes, dual attacks this morning, or was there some other attack, which is — there has been talk of here on the street.”

This distinction is not meant to imply that one type of reporting is more valuable or reliable than another. In this analysis, eyewitness reporting tells us about what reporters perceived and immediately interpreted during, or shortly after, the event. It thus gives us more information about the actual event. Narrative reporting, by contrast, tells us how reporters interpreted the event after having more time to process their perceptions and to synthesize additional information from other sources. Narrative reporting thus tells us about the collective narrative that was developing among reporters covering the event.

Here is an example of narrative reporting:

“Source-based reporting” is when a reporter reports on the possible use of explosives based on information from government officials who said they suspected that explosives were used to bring down the Twin Towers.

Here is an example of source-based reporting:

Pat Dawson, NBC, 11:55 AM: “Just moments ago I spoke to the Chief of Safety for the New York City Fire Department . . . [He] told me that shortly after 9 o’clock he had roughly 10 alarms, roughly 200 men in the building trying to effect rescues of some of those civilians who were in there, and that basically he received word of a possibility of a secondary device — that is, another bomb going off. He tried to get his men out as quickly as he could, but he said that there was another explosion which took place. And then an hour after the first hit here, the first crash that took place, he said there was another explosion that took place in one of the towers here. So obviously, according to his theory, he thinks that there were actually devices that were planted in the building. . . . But the bottom line is that, according to the Chief of Safety of the New York City Fire Department, he says that he probably lost a great many men in those secondary explosions. And he said that there were literally hundreds if not thousands of people in those two towers when the explosions took place.”

The challenge here lay not in identifying the absence of explosion reporting but in defining what constituted “reporting on the destruction.” In the end, we decided this should mean that the reporter had to describe the event of the destruction and not simply mention it in passing.

The tables below list each reporter and each instance of reporting according to the time at which each report was made. 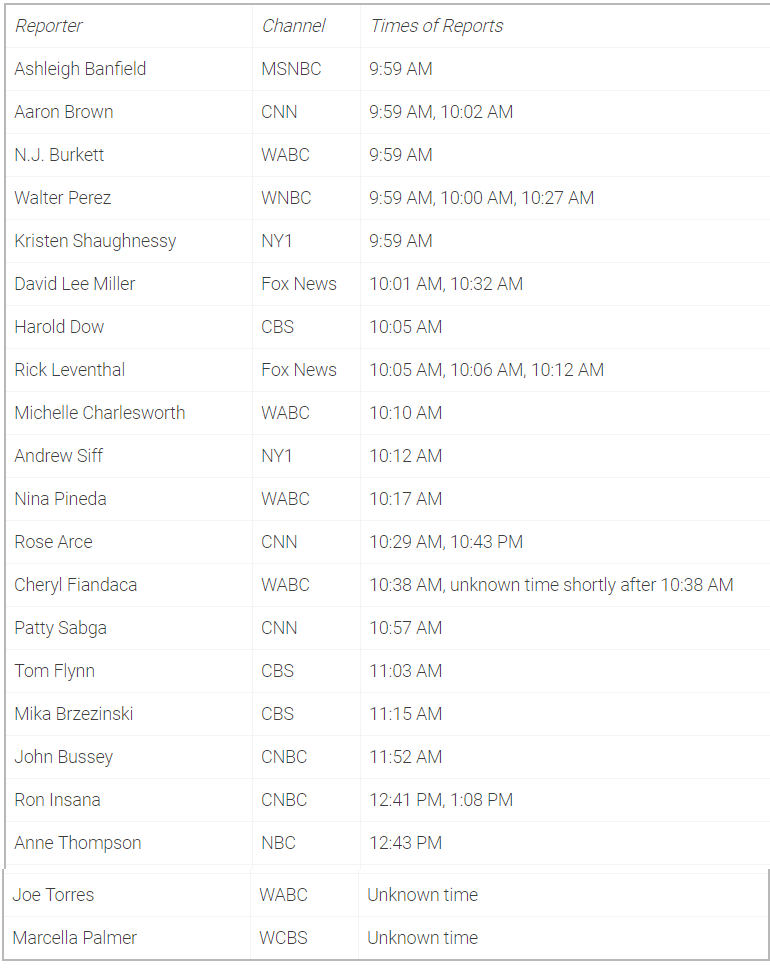 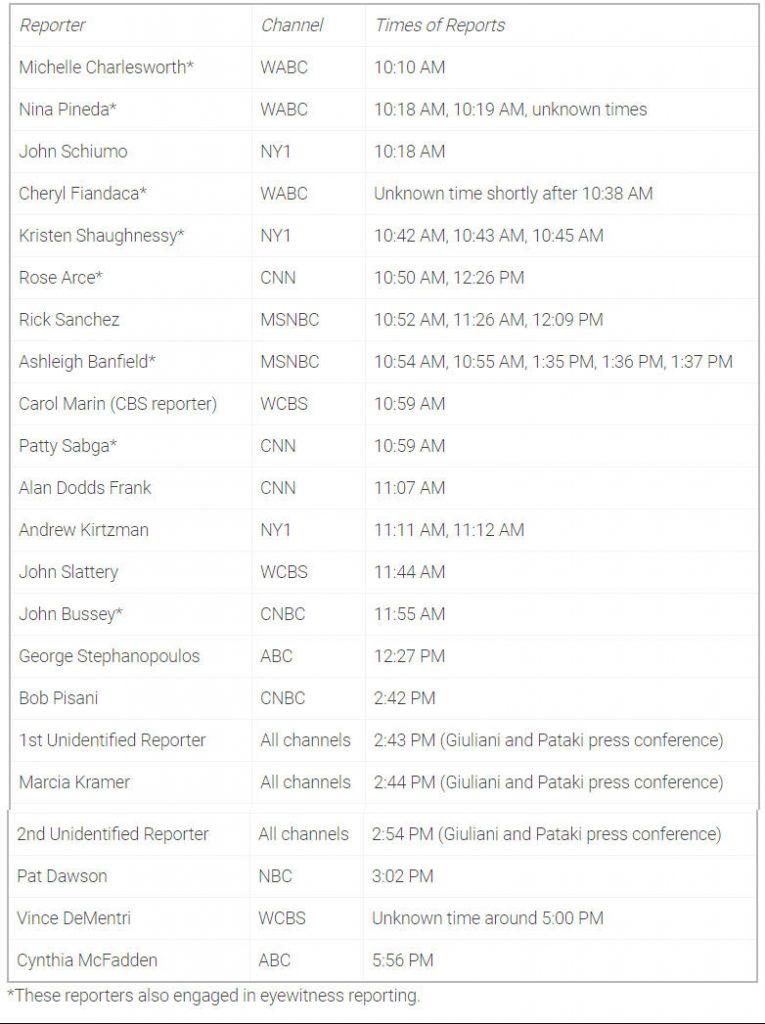 The picture that unmistakably emerges is that the great majority of reporters who witnessed the destruction of the Twin Towers either perceived an explosion or perceived the towers as exploding. This hypothesis of the Twin Towers’ destruction then continued to be prevalent among reporters covering the event, who essentially viewed the destruction of the towers as an explosion-based attack subsequent to the airplane strikes. We learn from the source-based reporting that the same hypothesis was also held by officials in the FDNY, the New York Police Department (NYPD), and the Federal Bureau of Investigation (FBI) — three of the most important agencies involved in the response to the attacks. In particular, with regard to the FBI, we are told the explosion hypothesis was the agency’s “working theory” as of late in the afternoon on 9/11.

Unlike members of the FDNY, most of whom provided their accounts during interviews conducted weeks or months after the event, it was the job of reporters to spontaneously communicate their perception and interpretation of events. Thus, when their reporting is compiled into one record, we are left with a rich and largely unfiltered collective account of what took place. Considered alongside the FDNY oral histories, these reporters’ statements, in our view, constitute strong corroborating evidence that explosives were used to destroy the Twin Towers.

Regarding the four non-explosion reporters, in addition to the fact that there are so few of them, we find that their individual accounts add little support to the fire-induced collapse hypothesis.

Two of the reporters were quite far away from the Twin Towers at the time of their destruction relative to most of the explosion reporters: Drew Millhon was “about 10 to 12 blocks north of the World Trade Center,” at the intersection of Varick Street and Canal Street, while Bob Bazell was at St. Vincent’s hospital on West 12th Street, approximately two miles from the World Trade Center. Meanwhile, Don Dahler, the only reporter who explicitly articulated the fire-induced collapse hypothesis, nonetheless likened the South Tower’s destruction to a controlled demolition, saying: “The entire building has just collapsed as if a demolition team set off — when you see the old demolitions of these old buildings.” The fourth non-explosion reporter, John Zito, was quite close to the South Tower when it came down. He did not describe an explosion, but he also did not attribute the destruction to a fire-induced collapse. It is worth noting that Ron Insana, whom Zito was with, vividly described seeing the building “exploding” and “blowing” and hearing a “noise associated with an implosion.”

Returning to the first question posed at the top of this article, we conclude that the hypothesis of explosions bringing down the Twin Towers was not only prevalent among reporters but was, in fact, the dominant hypothesis.

Furthermore, the 21 instances of eyewitness reporting, all of which contain spontaneous descriptions of the phenomena the reporters witnessed, strongly corroborate the overwhelming scientific evidence that explosives were used to destroy the Twin Towers.

In a subsequent article, we will examine how the hypothesis of fire-induced collapse so quickly supplanted the originally dominant explosion hypothesis.

Appendix A: Statements by 36 Explosion Reporters