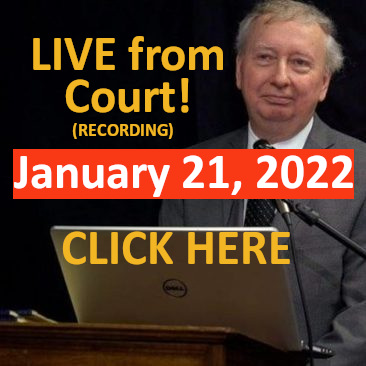 What: Oral Argument before the U.S. Court of Appeals for the Second Circuit
Who: Attorney Mick Harrison will argue for Plaintiffs-Appellants
When: Friday, January 21, 2022, 10:00 AM Eastern
Where: Livestream audio from U.S. Court of Appeals
Public livestream link: https://ww2.ca2.uscourts.gov/Court.html

NEW YORK, NEW YORK — The second highest court in the nation will hear arguments from family members of 9/11 victims, 9/11 Ground Zero responders, and two national nonprofits in a case likely to set precedent on First Amendment rights and grand jury secrecy. Plaintiffs-Appellants are:

2) Christopher Gioia, Fire Chief, former Fire Commissioner of the Franklin Square and Munson Fire Department and a Ground Zero responder who lost colleagues and friends on 9/11;

4) Michael J. O’Kelly, Fire Battalion Chief of the FDNY who, while responding to Ground Zero after the attacks, was exposed to the toxic and caustic dust and fumes, and was granted disability;

5) Jeanne Evans, the sister of FDNY Firefighter Robert Evans who perished at the WTC on 9/11;

6) Richard Gage, AIA, an experienced architect who has played a leading role in an independent multi-year investigation of the causes of collapse of the WTC towers and WTC 7 on 9/11;

7) Architects & Engineers for 9/11 Truth, a nonprofit organization of architects, engineers, and others dedicated to forensic research and public education on the scientific evidence related to the destruction of the WTC towers and WTC 7; and

8) the Lawyers’ Committee for 9/11 Inquiry, Inc., a nonprofit whose mission is applying the law to promote full factual transparency and accountability for the tragic events of 9/11.

In the Spring and Summer of 2018, the above-named Plaintiffs-Appellants submitted to the U.S. Attorney for the Southern District of New York for delivery to the Special Grand Jury a detailed and lengthy Petition, and Amended Petition, pursuant to the First Amendment, signed by more than 2,000 concerned citizens, with more than 50 scientific and technical evidentiary exhibits presenting extensive scientific and first responder eyewitness evidence that the WTC Twin Towers and WTC 7 collapsed on 9/11 due to the detonation of pre-planted explosives and/or incendiaries. Authored by experienced attorneys and based on the work of numerous highly educated, credentialled, experienced, and professionally licensed architects, engineers, chemists and other experts, including an expert in seismology, this Petition and Amended Petition objectively, logically, and professionally presents a body of hard evidence, and the criminal law that applies to that evidence, deserving of the scrutiny of a federal grand jury. In the Amended Petition, Plaintiffs-Appellants asked simply that the U.S. Attorney submit the Petition to a federal Special Grand Jury so the Grand Jury can exercise its independent judgment on that evidence and decide if further investigation is warranted.

The Plaintiffs-Appellants believe the U.S. Attorney’s position is a dangerous one that usurps the constitutional duty of the grand jury to determine if there is probable cause to believe a crime has been committed and that opens the door to abuse of the prosecutorial function that the grand jury was intended to prevent. If the DOJ prevails, it would be able to withhold any citizen report of any crime and any supporting evidence it wishes from any grand jury.

The Court of Appeals for the Second Circuit will hear argument on, and eventually decide, these critical questions for all Americans regarding their First Amendment rights, grand jury secrecy, the role of the grand jury, and the right of WTC victim family members and Ground Zero first responders to have evidence of serious 9/11 crimes presented to a grand jury.